Director of Programming Spike Radway began CDPUG’s first ever online meeting on March 26 with the song “The End of the World as We Know It (And I Feel Fine)” by R.E.M. A very appropriate selection with the current pandemic and changes we’ve all been experiencing these past few weeks. We are adapting to the times! 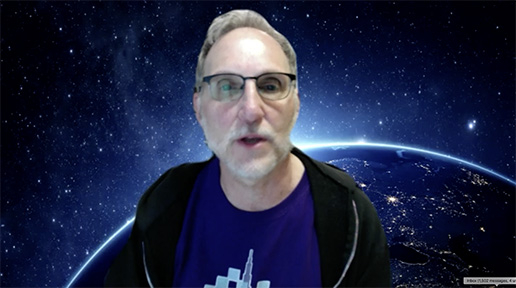 Members were able to attend from the safety and convenience of their own homes while also trying new technology. A quick online survey showed that about half of the 33 attendees had not used Zoom before, so not only did we have a great speaker but we also learned about a new app. An app that is currently VERY useful! Before the meeting, members dined on virtual pizza, got FREE parking, fine-tuned their Zoom settings and began to experiment with breakout rooms. Meeting attendees can split off into smaller groups for networking and additional discussions. 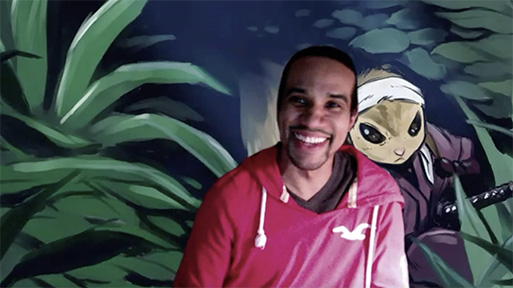 Our speaker, Cleveland illustrator and comic book artist Miguel C. Hernandez, gave a very engaging presentation about his journey creating comics and graphic novels and how it furthered his interest in graphic design and marketing. Miguel is co-founder of Studio JS with his sister Michelle Littlejohn who is also an artist, illustrator and sculptor. They have a common love of illustration and comics and complement each other. Miguel said Michelle “helps him think a little differently about the projects they are working on.”

Studio JS currently focuses on illustration and graphic design including logos and storyboarding. Some of Miguel’s current projects include graphic novels or books for JISEI, Hanzo Gaiden and Neo Zero. 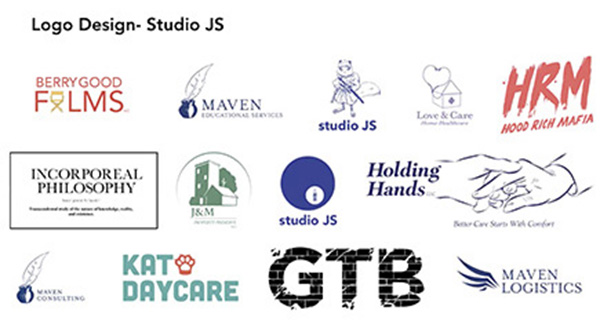 Miguel walked us through the process of making comics. It all begins with ideas and a story which he then takes into thumbnails. When creating thumbnails he looks at the overall project, plans out space, time and how panels run with each other. It is the most important part of the comic book process and actually the most time consuming. From thumbnails he moves through rough pencils, inks, tones or color, dialogue and edits and finally book design. 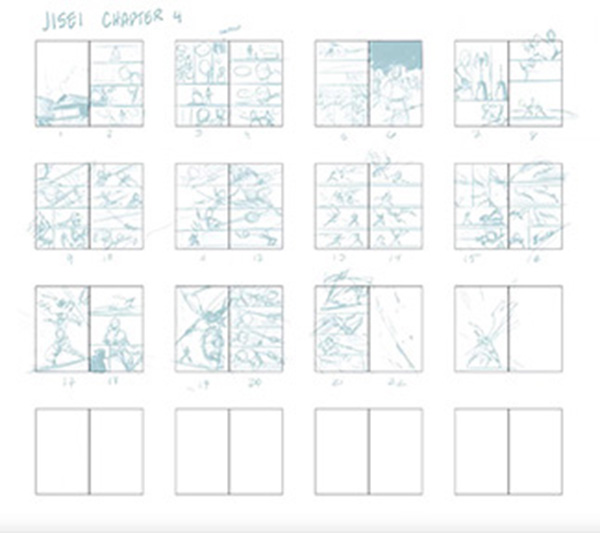 An example of Miguel’s thumbnails.

Miguel uses Procreate with an iPad Pro and Apple Pencil during the early stages for thumbnails and rough pencils. This combination of tools provides him lightness, mobility and a great app. A Cintiq tablet was his work horse for many years the, but he was quickly switched to the iPad Pro and Apple pencil because of their precision and feel. The Cintiq tablet possessed a slight but noticeable latency when drawing. This was not so with the Apple pencil. Procreate has a simple interface and he likes their brushes. It also lets you record your work for replay in a time lapsed video.

Once his rough pencils are done, Miguel prints them out on Bristol board paper and inks them. The inks are then scanned at 600 dpi and taken into Clip Studio Paint Pro where he adds tones or color. Clip Studio Paint Pro is a Japanese art program specifically for comics, illustration and animation. The cool thing about Clip Studio Paint Pro is that its interface is the same on desktop and iPad. It is also subscription based and they have their own cloud. Miguel said he works both digitally and traditionally while his sister pretty much only works digitally in Procreate on the iPad. 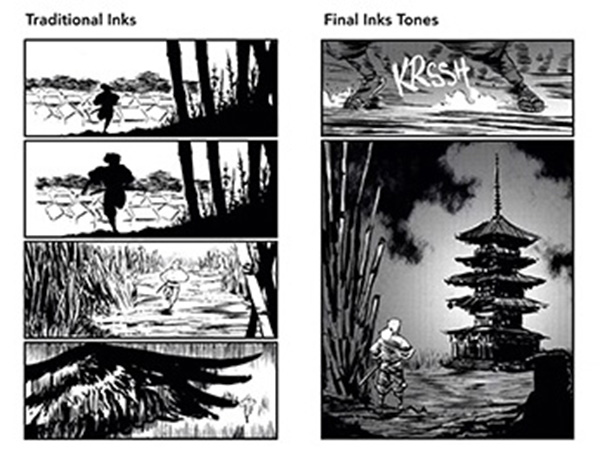 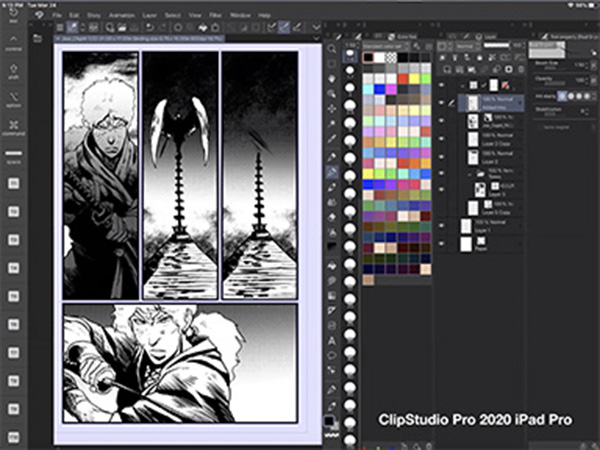 When the illustrations are done, Miguel uses Adobe Illustrator to add the dialogue and caption boxes. Miguel creates the style guides, etc. and adds all the type. He recommends the site BlamBot.com (Nate Piekos) as a resource for comic book typefaces, caption boxes, templates and other comic resources. (BTW – I experimented with a few BlamBot.com fonts for the header!) The finished pages are then proofed and assembled in book form. 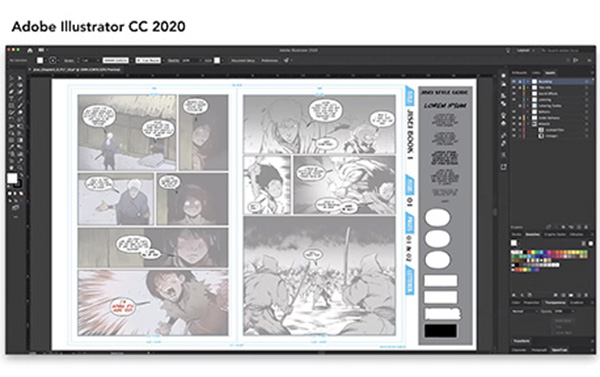 Which areas in comic creation has Miguel found a need for graphic design? He finds design important in: comic page layout, lettering, logos, book design and marketing. Miguel stressed the importance of design on comic book covers. He has encountered other independent artists at conventions who need to improve their covers. You sell or market your books with the cover and it should speak to the reader, be legible, tell a story and even convey a mood. He’s expanded his design work into logo work for companies over the last 2-3 years. In addition to Illustrator, he also uses Photoshop and InDesign to create ads for places like Instagram and Facebook. As with most of us though, he was interested in checking out Affinity products to get away from the subscription.

Miguel showed some of his covers and how they’ve evolved. One example called JISEI (which means “death poem”) showed 2 versions. An earlier version’s title was hard to read while the second version has a legible name and better hierarchy to the information. 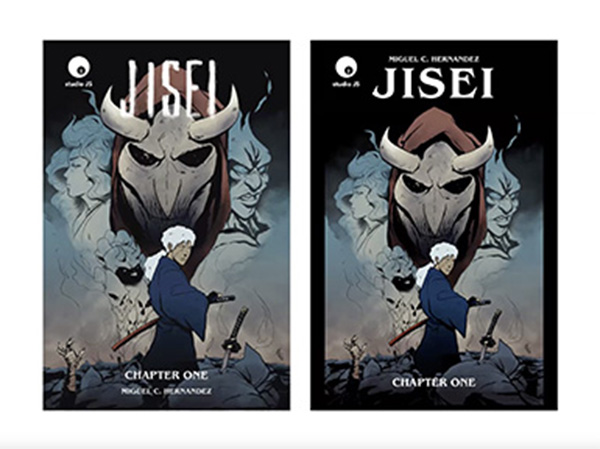 Miguel mentioned a few artists he’d recommend for anyone interested in creating comics. Jake Parker (Inktober) is a very well-rounded comic artist and designer who has YouTube videos on creating comics as well as using Kickstarter to fund your projects. A group called Creaturebox is also worth checking out. They have great design, textures with ripped edges and tape.

Miguel and his sister fell in love with cartoons, comics, and anime at an early age – watching their older brother’s Japanese VHS tapes. He was attracted to the aspect-to-aspect storytelling Japanese anime uses. Aspect-to-aspect storytelling goes from scene to scene to tell a story instead of action to action like American animation. Some anime examples are Akira, Fist of the North Star, Vampire Hunter D and films like Ghost in the Shell and The Dark Night. He still likes to watch old 1950’s Samurai films by Akira Kurosawa and he and his kids are Mandalorian and Zelda fans.

In terms of marketing, Studio JS sells digital and hard copy books on a site called Gumroad.com. They also sell comics and illustration prints at shows and on Etsy and is experimenting with Kickstarter to fund some printed books. One great tip about Gumroad.com is that it is a haven for tutorials. Check it out to find out how to draw in Procreate, storyboard, or draw comics, etc. 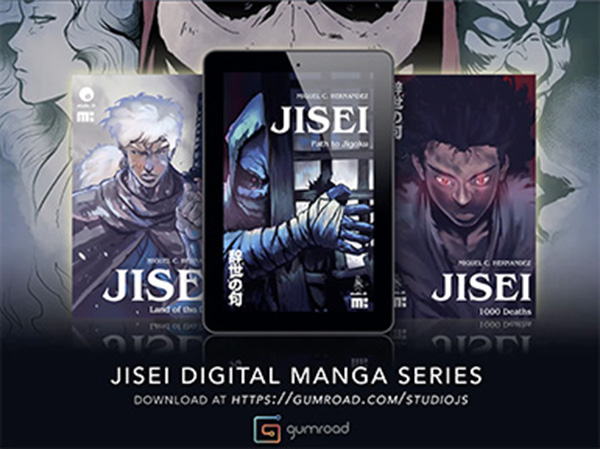 An ad for the JISEI Series on Gumroad.com

Other tips and comments from our Q & A session:

• Friends and patrons are equally interested in his imagery and story. Miguel enjoys finding that people are actually reading the comics as he talks to them.

• Miguel uses aspect-to-aspect storytelling primarily in anime work and not so much in graphic design work.

• His favorite anime and comics growing up included Akira, Spawn, Spider Man, Blade of the Immortal to name a few.

• It takes about 3 months to put out a 28-page book from start to finish.

• Miguel’s interest in Asian culture, especially Japanese culture, started when he was a kid with Bruce Lee movies. He was interested in martial arts as a kid and still practices martial arts today. Someday he’ll visit Japan.

• Because he is a visual person Miguel storyboards the comics before writing the copy.

• It’s very important to consider the placement of your text as you’re drawing – leave spaces for that purpose.

Thank you so much Miguel for sharing your art and experiences with CDPUG!

About the Author: Christine Kaminski 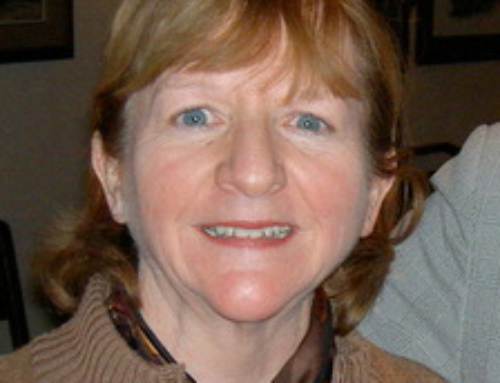 How to Deal with Your Death … Digitally Speaking 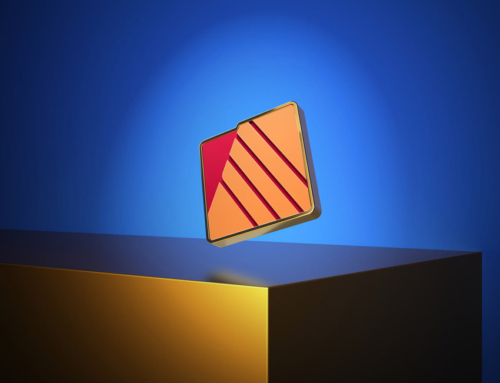 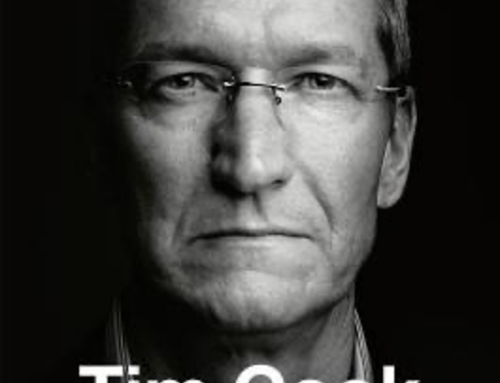 Book Review of Tim Cook: The Genius Who Took Apple to the Next Level 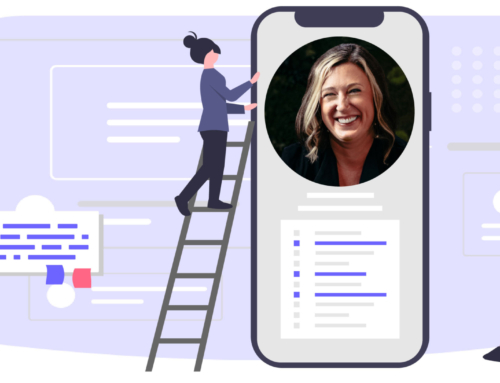